The course is taught by Christian Maes. He tends to be a bit vague, however still informing. The topics are material that were mostly covered in the bachelor, nevertheless you will notice that it is needed. Among the new topics are density matrices, decoherence scattering, quantum optics, a bit of quantum information theory and foundational issues. In November there is a test which does not count for the exam.

Maes did go over some things he could ask. Here is a summary.

Something similar as the following. 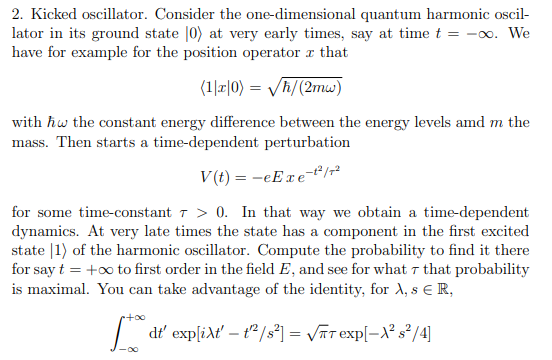 1) Oral: A. discuss about symmetries of the Schrödinger equation: when is

2) The quantum circuit of the Toffoli gate. What does this gate do?

3) Subaddiditivity: prove that the photon number of coherent states is Poisson distributed.

4) A. Show how you go from the first formula on page 42 of the lecture notes to the second one. (Rewrite the Hamiltonian using an identity of Pauli matrices, and in terms of the magnetic field). B. Calculate

You can always look at the old course Advanced topics in QM.